Guess Who Came to Big Fish?!

On July 24, 2016 I went to see the play Big Fish at the Madison Street Theatre in Oak Park IL. Billy Surges is the Director. He also played Karl the Giant, a humorous character. Katie Meyers, with a beautiful singing voice, was one of the female lead characters, Sandra Bloom. The other female was the lovely and talented actress Aiyanna Wade as Josephine. Big Fish is about Edward Bloom, who always tells stories about great adventures which include meeting a witch, kissing a

Coming soon to a website near you, SpongeBob mystery episode from season 3. #entertainment

SpongeBob is out jellyfishing and he finds this rare blue jellyfish. He tries to catch it but the jellyfish is too fast and sneaky and swims away. SpongeBob 's rebuttal: "Someday I'll catch old No Name". The transition cuts to SpongeBob eating at the Krusty Krab. He's on his lunch break. For lunch he pulls out a krabby patty and adds jellyfish jelly to the patty. A customer tastes some and ends up singing a song that ends up being one of Squidward's records. After singing the 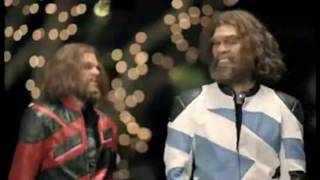 Twelve years ago, one of the greatest series of commercials was produced by Geico Insurance way back in 2004. This idea was about 2 cavemen who hated the saying "Geico.com, so easy a caveman can do it". The commercials show them in a variety of settings and they are humorous. There were 21 different commercials. I'm surprised they didn't make more! In late 2007, a spin-off was made on ABC using the cavemen. This ended early 2008 and did not last for too many episodes. #en

SpongeBob gets hungry in the middle of the night. He decides to make himself a seanut butter and jelly sandwich. I think there was milk. SpongeBob finally fell asleep but he made the cruel mistake of leaving his fridge open at night. The next day we find SpongeBob's house frozen. We find him sneezing on his bed. He walks toward his bathroom but he slips and ends up ricocheting in different directions including his windows. "I don't get colds, I get the suds" says Spong

I went to The SpongeBob Musical and here's more about the show. The stage includes a Rube Goldberg machine on the right (there was also one on the left) which was the best part of the stage. The story line was way different than any of the SpongeBob cartoon episodes. In the center of the stage, we have the houses of Patrick, Squidward, and SpongeBob. Some of the stage lighting was facing out toward the audience, making it super bright during some of the songs. They tossed ou